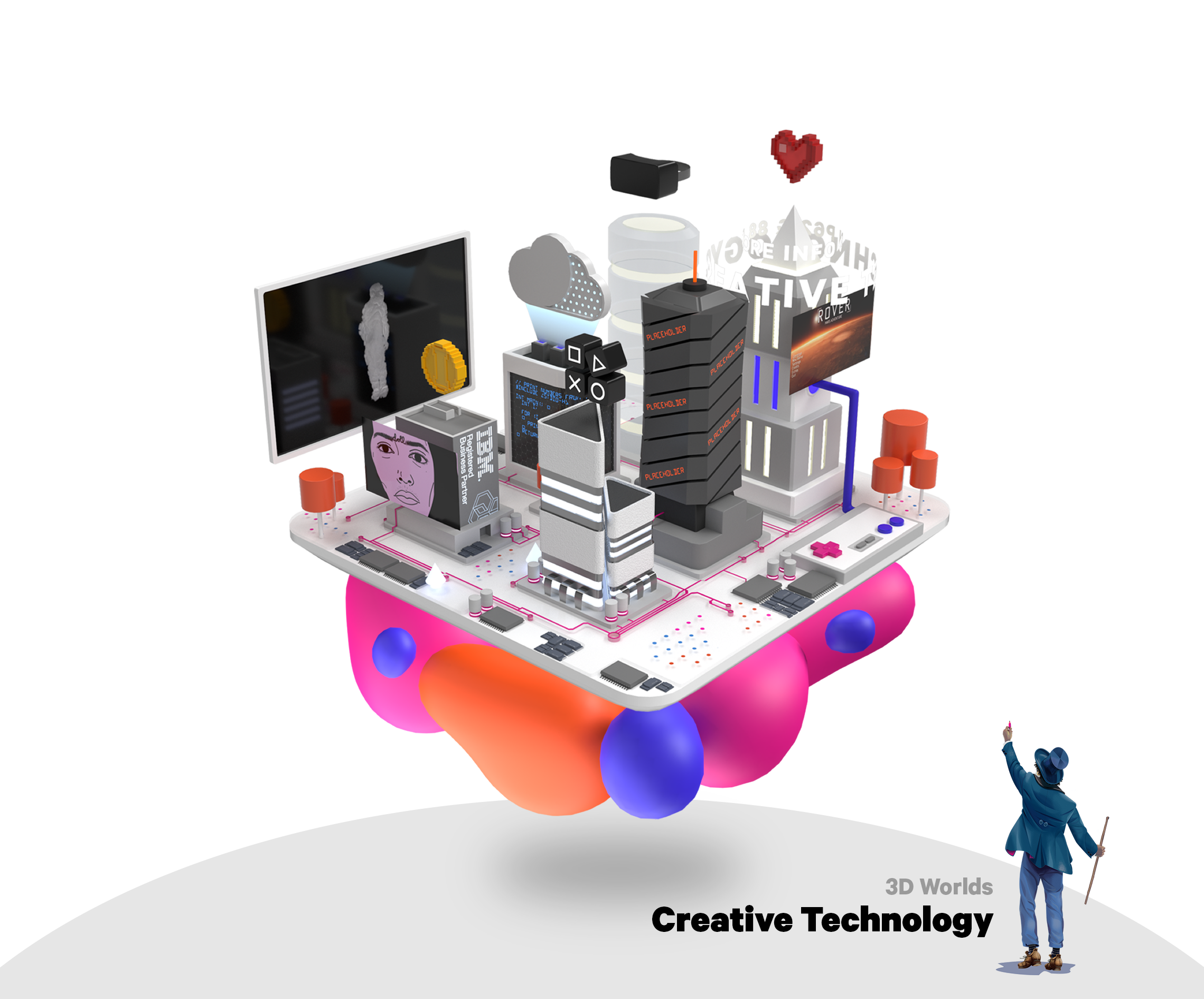 Last Friday afternoon, we announced the winners in all 18 categories of the 12th edition of the Effective Mobile Marketing Awards. Each day this week, we’ll be taking a closer look at the winning entries, starting today with the Grand Prix Award, the Most Effective Advertising Campaign, and the Most Effective FMCG/CPG Campaign categories...

Every university has a Course Guide, spouting claims of industry connections, world-class alumni, and state-of-the-art courses. A 150-page PDF for an audience with an average attention span of 8 seconds.

When Billy Blue College of Design at Torrens University Australia started work on its 2020/21 Course Guide, it decided to do things differently, with the aims of connecting with its audience in a fresh, unexpected, and exciting way; repositioning Billy Blue as the place to study design and creative technology; and showcasing the depth of our industry connections and the talent of our students and alumni from across the globe.

Based on research showing that 43 per cent of high school students don’t know what they want to study when they leave school; that future creatives want to be shown not told; and that the ultimate source of inspiration is from ‘people like me’ – real peers, not the typical influencer, they decided to augmented the traditional printed Course Guide with an immersive webAR experience. A great idea any time, but during a pandemic, with physical interaction limited, an idea of its time.

The tap-to-place experience built using Zappar webAR saw users tap their Android or iOS devices to see a signpost erupt before their eyes, the start of their adventure into design and creative technology. Billy Blue himself then guides them to explore the five unique ‘worlds’ of Fashion, Digital Media Design, Creative Technology, Graphic & Communication Design and Interior Design.

Each world came to life through the power of augmented reality, inspired by and featuring the work of current students and alumni, the university’s most prominent industry connections and, most importantly, a glimpse of where an adventure with Billy Blue could take you. The experience was activated through the cover of the printed Course Guide; OOH panels and hero sites; and a dedicated campaign micro-site

The integrated experiential campaign launched in December 2020 and ran for nine weeks, including OOH across Sydney, Brisbane and Melbourne CBD, with each placement featuring a QR code to access the experience. There were also TikTok influencer posts and a paid TikTok campaign; plus organic digital and social

The campaign delivered over 30,000 unique engagements with the AR experience – six times the average amount of PDF Course Guide downloads normally seen in the same period. There were more than 1,100 scans of the OOH campaign, with users returning up to 15 times to continue exploring the AR worlds. And 13m impressions from the paid and influencer campaigns on TikTok. More importantly, the University exceeded its February 2021 enrolment target by 20 per cent.

A deserved winner of the Grand Prix Award, this campaign also took the top honour in the Most Effective Augmented Reality/Virtual Reality Campaign and Most Effective TikTok Campaign categories.

Judges’ View:
“A very deserving winner of the top prize for its bravery, innovation, and of course, results. 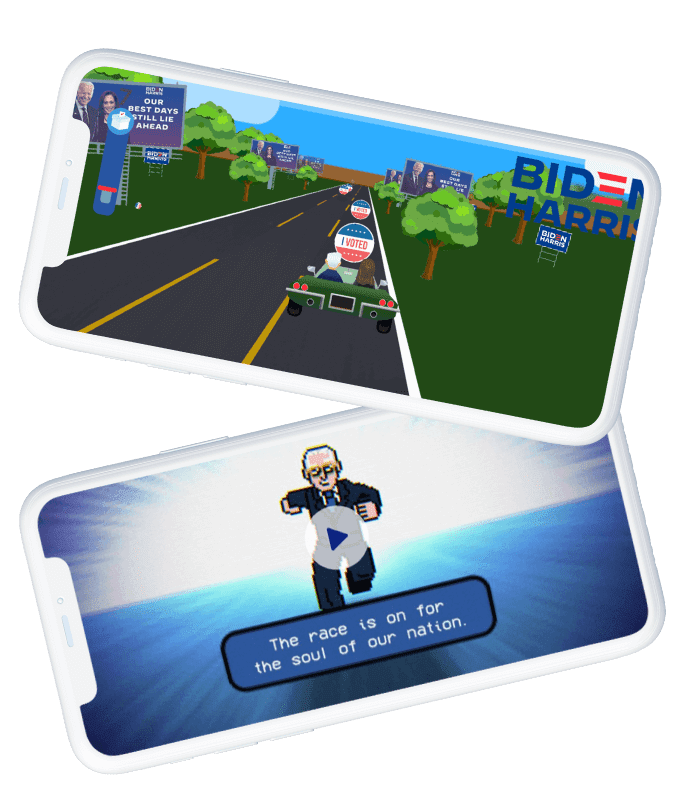 Joe Biden’s 2020 election campaign took place in the middle of a pandemic, where freedom of movement was much curtailed, so using digital channels was something of a no-brainer. However, his campaign team wanted to look beyond mainstream digital channels to reach voters at home, tapping into the many hours spent in front of smartphones and computer screens during the pandemic.

Its key audience was women ages 30 to 55, who market research suggested spent a significant amount of time playing mobile games. The campaign’s collaborating agency, Bully Pulpit Interactive, decided that playable ads represented the best opportunity to break into this vertical. The interactive elements of this ad unit would help Biden’s messaging stand apart from more traditional political advertisements while tapping into the positive sentiments associated with gaming.

Tapjoy’s Interplay Studio brainstormed several playable ad concepts for the Biden campaign. Bully Pit Interactive chose the “Ridin’ With Biden” concept – an Interactive End Card where users drive Biden’s beloved Corvette past obstacles to reach the White House. The ad opened with a gamified 8-bit video that introduced the concept in a fun and engaging style. The campaign team was particularly pleased with how the ad emphasized “Bidenisms” – various Biden sayings and campaign messages such as: “The race is on for the soul of our nation.”

On the brand safety front, Tapjoy prepared a custom brand-safe app allow list, and verified that app publishers on this list were willing to accept political ads before the campaign deployed. Ridin’ With Biden launched in mid-October and targeted users across a set list of swing states like Arizona, Colorado, and Georgia. In total, the Bully Pulpit Interactive team managed over 75 vendors across 13 channels over eight weeks with the same end goal of driving traffic to IWillVote.com. The Tapjoy campaign contributed to a significant volume of site traffic at a surprisingly low cost of $0.66 CPC, 5X lower than the campaign’s $3.20 CPC average for other channels.

The campaign drove more than 12m completed views and 4m ad engagements, along with a 35 per cent engagement rate and a 9 per cent clickthrough rate. The ad creative itself generated a 90 per cent video completion rate and 65 per cent game completion rate – 3x above Tapjoy’s internal benchmarks. A successful campaign, and also a brave one, putting faith in mobile gaming’s ability to reach the desired demographic. This entry also took the award for the Most Innovative Campaign.

Judges’ View:
“Good consideration of brand/ad safety before deploying the campaign. Innovative use of gaming for a political campaign, and strong results.” 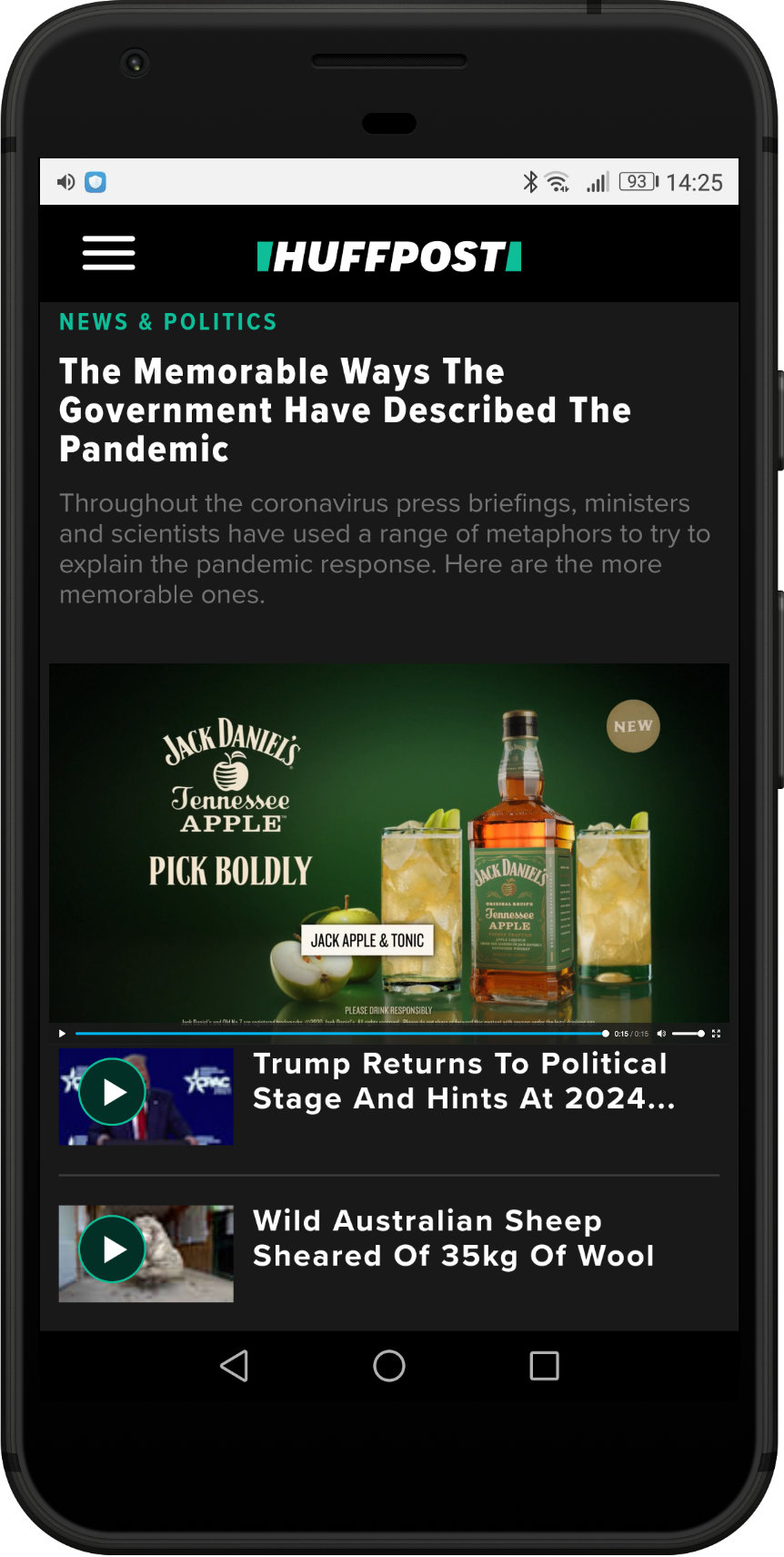 In 2020, Jack Daniel’s parent company Brown Forman was tasked with promoting two brands, the long-established Jack Daniel’s Tennessee Whiskey (JDTW), and recently-launched Jack Daniel’s Tennessee Apple (JDTA), at a time when bars and pubs were closed. The marketing objective was to drive awareness of both brands, and footfall into the off-trade, and by doing so, gain market share from competitors – drinkers of flavoured spirits, long serve whiskies, rum and other non-flavoured spirits.

The audience, for these brands, defined as ‘Independent Spirits’, is naturally tech-savvy and mobile-first, even more so during the pandemic. So Hawk Platform worked with Jack Daniels’s media agency, Spark Foundry, to execute an advertising campaign that adopted smart audience targeting to encourage people to go to store and buy the products.

Brown Forman specified the supermarkets stocking the products that were to be part of the campaign; Hawk Platform ringfenced these so that mobile devices coming within a range of 10 kilometres were targeted with audio and display ads for JDTW, display for JDTA. Hawk Platform also set a control group to compare the actions of people who had seen or heard an ad with those that hadn’t. It also worked with IRI to measure the sales uplift at supermarkets that had been ringfenced, compared to those that hadn’t in order to demonstrate the effect of the ad campaign on consumer purchasing behaviour.

Hawk Platform built two distinct audience groups: JDTA focused on a trend-setting Gen-Z audience of males and females that enjoy eating out, travelling and socialising and are perceived to be influential among their peers, whilst JDTW included a slightly older demographic, adding Millennials as well as Gen Z, with a male skew and interests such as gaming, sports and cars.

To reach consumers throughout the purchase funnel, Hawk Platform recommended a multi-touchpoint approach. Pre-roll and story formats were tested, and to capitalise on an already-engaged audience, programmatic audio ads – a first for Brown Forman in the UK – were then deployed as consumers moved into the (purchase) consideration phase. Finally, display formats with Google maps integrated pushed consumers even further through the funnel towards purchase in supermarkets. All display formats were bespoke for Jack Daniel’s, incorporating static and video creative, along with store-finder features.

The JDTW audio ads came in 30-second and 15-second versions, while Hawk Platform’s in-house studio built four mobile display ads for each brand, incorporating static imagery and video content, as well as store-finder features to make it easy for potential buyers to locate the nearest retailer.

The campaign reached 1.5m more Independent Spirits than planned and they were 13 per cent more likely to engage. More importantly, it coaxed them from their sofas and into store, with a cost-per-store visit that was 95 per cent more cost-efficient than expected. Sales tracked and attributable to this campaign delivered an astonishing £570,000 additional revenue for Jack Daniel’s, an ROI of £7.09 – 3.5X higher than planned.

Judges’ View:
“Strong methodology to measure campaign impact, including the impact on sales. Strong ROI for the campaign given the media investment. Innovative formats, strong creative, and a great set of results.”

Tune in tomorrow when we'll be profiling the winners of the Most Effective Pandemic, Location and Retail Campaign Categories. You can also see all the winning campaigns on the Awards website.