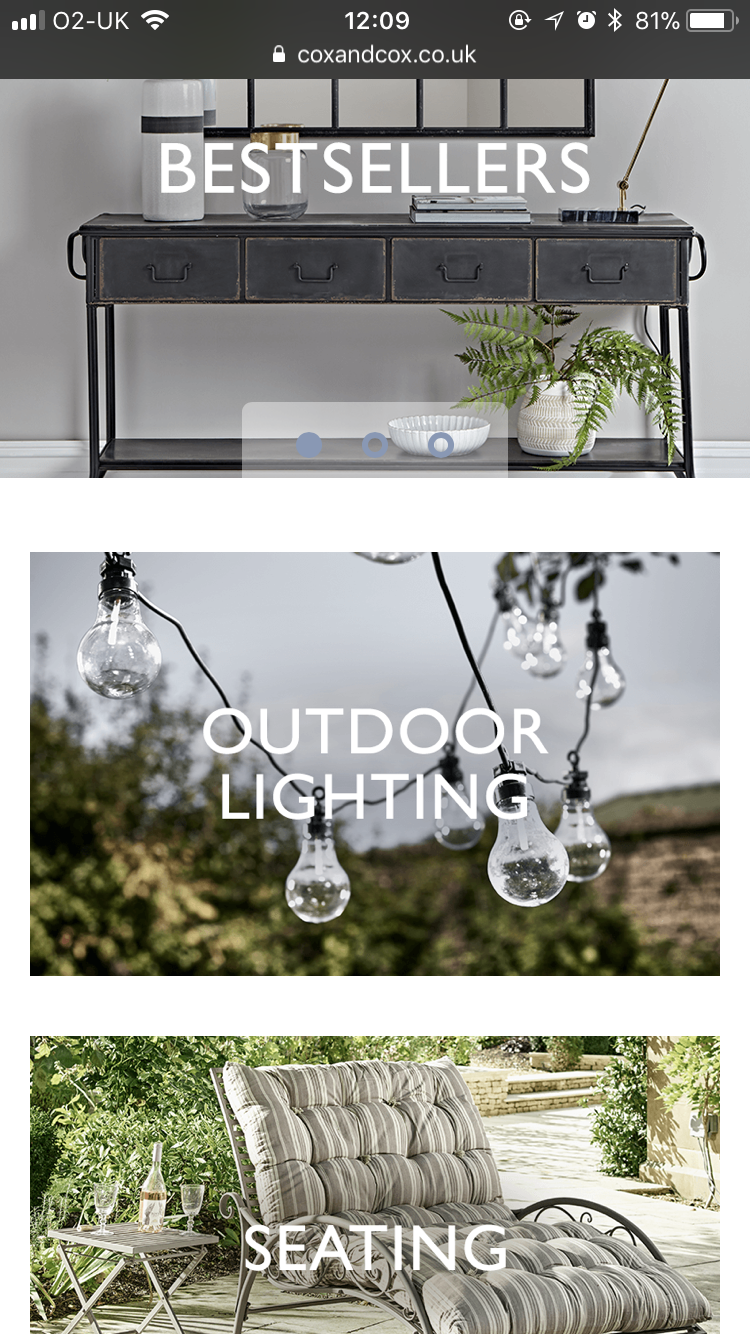 In the fourteenth Century, the ancient settlement of Frome in Somerset, was the centre of a thriving wool and cloth industry. Today, the historic market town in the South West of England is home to Cox & Cox, an online homeware, furniture, and textiles retailer currently enjoying phenomenal success.

“We’re growing 20 per cent year-on-year,” said Aynsley Peet, the brand’s eCommerce manager. To support this progress, Peet and his eCommerce team of five realized the company needed to upgrade its Magento Commerce 1 platform. “In fact, we made the decision to upgrade all our technologies at once, moving our ERP to NetSuite, while changing our warehouse system too,” he says. “For our webstore, we wanted to make our images stronger and clearer, improve navigation, and move from an M.dot mobile version to fully responsive.”

Staying ahead
Launched in 2001, Cox & Cox has thrived due to its business agility, and by staying ahead of new technologies and trends. The brand is heavily invested in social media and maintains a popular Instagram account that draws customers to its webstore. There, shoppers can browse a curated collection of homeware products they can’t find in traditional catalogues, including accessories for the home and garden, lighting and rugs, attractive storage solutions, and other decorative touches. Each item is photographed at the company’s studio in Frome, uploaded to the website in less than 24 hours, and dispatched from the company’s warehouse.

To streamline its eCommerce operations, the company needed a flexible, powerful platform. “I’ve previously worked with Demandware, Hybris, Salesforce Commerce Cloud, but for us, Magento Commerce was the logical decision," says Peet.

Cox & Cox signed the contract to upgrade to Magento Commerce 2 in August 2016. In November of that year it began discovery work with its development agency, Space48. “We were aware that Magento Commerce 2 was on the horizon, and it felt right for us to take advantage of a new web design at the same time, while upgrading our other technologies,” says Peet. “It felt right to do it all in one go instead of doubling up on integrations.”

The company had to go live before August of 2017, ahead of its peak season, November to December. Otherwise, the relaunch would have to be postponed to 2018.

“We locked ourselves in a room and tried to reimagine our navigation,” says Peet. “We tried to make it as flat as possible, and not use too much layered navigation. We wanted to make it as easy as possible for customers to find what they want. The Magento Commerce 2 design we chose is quicker. The new navigation is structured and very visual.”

With mobile accounting for up to 50 per cent of traffic to the site, the main benefit of the upgrade was moving from an M.dot to a fully responsive site. “A customer is maybe less likely to buy a £1,000 sofa on a mobile, but they are certainly browsing on mobile, and perhaps making the purchase later on desktop,” says Peet. The new Cox & Cox mobile site helped to show customers what they were buying.

Products are easier to find, with a site search so intuitive that statistics show customers who use it are four times as likely to convert. Cox & Cox was also one of the first customers to use Magento Shipping, optimizing the way it gets its products into the hands of customers by connecting its WMS to the Magento Shipping API to reduce back-end complexity.

“Our key growth has been on mobile,” says Peet. “The site is very robust, we encounter very few issues, it’s very good for us, very strong.”

"The first in our new monthly series of mobile, social, and influencer marketing investment round-ups with @Tracxn f… https://t.co/bV2pouM7ja"
8 hours ago
"There's a lot we don't know about the coming months, but one thing is certain - our Virtual Masterclasses are here… https://t.co/pduhTfNRYZ"
9 hours ago
"In these difficult times, it's even more important to celebrate our successes! Enter #EMMAs by midnight UK time, Fr… https://t.co/M4kJGRcTES"
11 hours ago