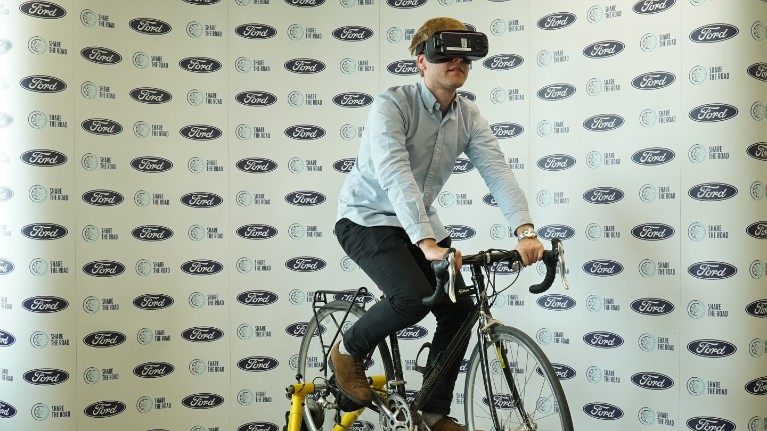 A new VR experience created by Ford Motor Company has helped to prove that virtual reality can encourage empathy in users, as part of the brand's 'Share The Road' campaign for increased safety and cooperation between drivers and cyclists.

The WheelSwap VR experience was created by global production studio Happy Finish and agency WPP, and enables motorists to see from a cyclist's point of view how scary it can be when drivers overtake too closely, swerve without indicating or open car doors without checking for bikes. A version was also created for cyclists that showed what it is like for drivers when riders jump red lights, cycle down one-way streets the wrong way or swerve unexpectedly.

More than 1200 people across five European countries took part in the research conducted by Ford, with an impressive 91 per cent stating that they intended to change their behaviour on the road after going through the VR experience.

"There is no more effective means of appreciating someone else's point of view than stepping into their shoes, or in this case, on to their pedals," said behavioural scientists Dan Berry, who helped devise the experiment. "Empathy is an immensely powerful emotion."

Ford is now planning to integrate the WheelSwap VR experience into Ford Driving Skills for Life, its driver training program for 17 to 24 year olds. The program already includes another VR experience created by Happy Finish, 'Reality Check', which educates users on the dangers of getting distracted behind the wheel.

"Being early practitioners in the creation of highly immersive VR experiences, we anecdotally already knew the power of such a level of immersion and the potential that has to prompt behavioural change," said Daniel Cheetham, global CEO of Happy Finish. "It's genuinely exciting to now have hard scientific evidence to that effect.

"Working with the team at Ford and WPP over the past couple of years has been great; we are particularly proud of our work together that increases road user's attention to safety. If our work helps to save just one life on the road, then our mission is accomplished."