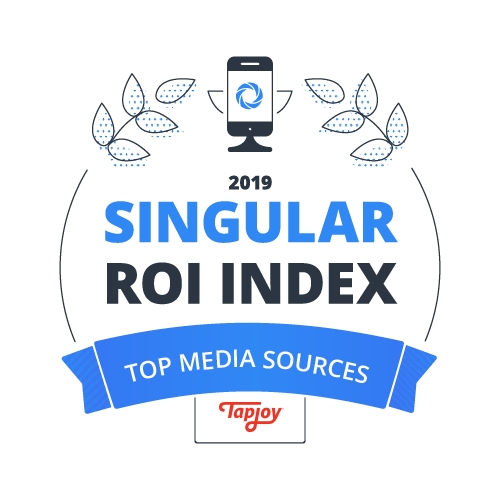 Mobile advertising network Tapjoy gained an impressive recognition this month with the release of Singular’s ROI Index. According to Singular’s top mobile media source rankings, Tapjoy has rocketed from fifteenth place to eighth in the span of a single year.

The Singular ROI Index is an in-depth analysis of $1.5bn in advertising spend from 700 distinct media sources. By combining marketing campaign data, mobile attribution metrics, and consumer data, Singular generates a comprehensive picture of performance-driven growth in the mobile space each year.

“I’m immensely proud of our performance teams around the world who put so much effort into increasing our efforts with mobile developers and advertisers,” Tapjoy’s SVP of global performance Sarah Chafer said in a statement. “These results correlate with continued Year-On-Year growth that we fully expect to continue in the years ahead.”

If you’ve been following Tapjoy in recent months, this growth might not be a surprise. Over the past year, this media source frequently made headlines for a variety of mobile advertising benchmarks. A handful from notable examples include:

Tapjoy also made news earlier this month when Jeff Drobick was appointed its new CEO. The former chief product officer will take over the role from Steve Wadsworth, who is transitioning to chairman of the board.

As of writing, Tapjoy offers a global reach of 800m monthly active users, including 150m monthly active users in North America. Its SDK is integrated into over 30,000 mobile apps. Between these growth metrics, recent announcements, and Tapjoy’s knack for gaining various mobile advertising exclusives, we should expect to hear much more from it in the years ahead.