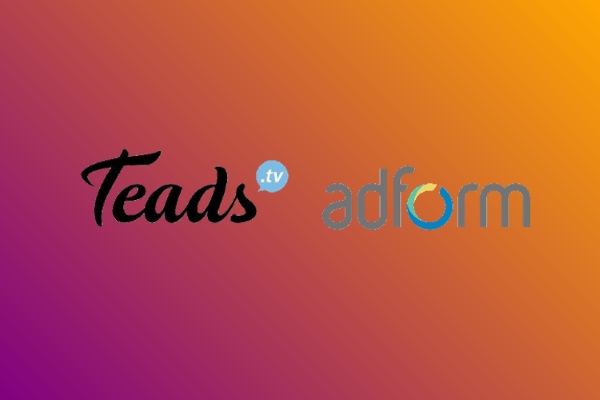 “We’re delighted to broaden the scale of Teads’ premium inventory through our integration with Adform,” said Hugues Templier, EMEA programmatic business development director at Teads. “As one of the exclusive RTB buying platforms connected to Teads inventory, advertisers and agencies will have access to the world’s best quality publishers through Adform, so they can be confident their ads will appear in viewable, brand-safe environments.”

Outstream is one of the most popular digital video ad formats in the UK, accounting for 52 per cent of all video ad spend, and there is significant demand across Europe for this format, especially in programmatic. The new integration aims to meet this demand, making new forms of inventory available to Adform’s buyers in Europe, North America, MENA and APAC.

“We’re very excited to have finalised this direct integration with Teads, which enriches Adform’s offering and will help our clients to find new opportunities to present their customers high impact messages in the right context. Teads has been able during these years to strengthen its offering at scale with high quality inventory and video itself is one of the main trending channels in our industry so we’re sure we’ll all benefit from this new partnership.”

Teads has also announced the findings of a study into how European publishers are dealing with GDPR, with figures suggesting that UK publishers are most at risk of being hit with fines. UK publishers are lagging massively behind places like Spain, France and the Netherlands, with just 67 per cent putting software in place to capture consent. Based on a sampling of publishers across the Teads, most markets show over 80 per cent of publishers confirming consent from users.

The study also found that 63 per cent of European publishers’ traffic is filtered by a CMP in order to allow their users to express their privacy preferences and comply with GDPR’s rules. Half of internet users have so far either accepted or refused cookies for personalised advertising, with 95 per cent of those users having expressed consent.

“GDPR is still in its implementation phase, it takes time for the advertising ecosystem to adapt,” said Pierre Chappaz, founder and executive chairman at Teads. “The Information Commissioner’s Office, like other European regulators, understands this. Apart from the increase in technical workload, publishers have not yet seen any significant impact from GDPR.

“In an effort to comply with GDPR regulation, two thirds of UK publishers have put a Consent Management Platform (CPM) in place, a ratio comparable to what we see in other European countries. As a result of this implementation, on average seven per cent of users are refusing cookies used for personalised advertising, which is slightly above the European average of five per cent.

“The real impact will be felt when the entire ecosystem, including demand side platforms, switches into full GDPR mode. This is likely to happen around the end of the first quarter of 2019. Users who refuse cookies will generate less revenue for publishers because blind ads or even contextual ads are valued less by advertisers than personalised advertising. Fortunately the vast majority of users are not worried about cookies and personalised ads; they may even see the benefit of being shown relevant ads rather than useless and irrelevant ones.”