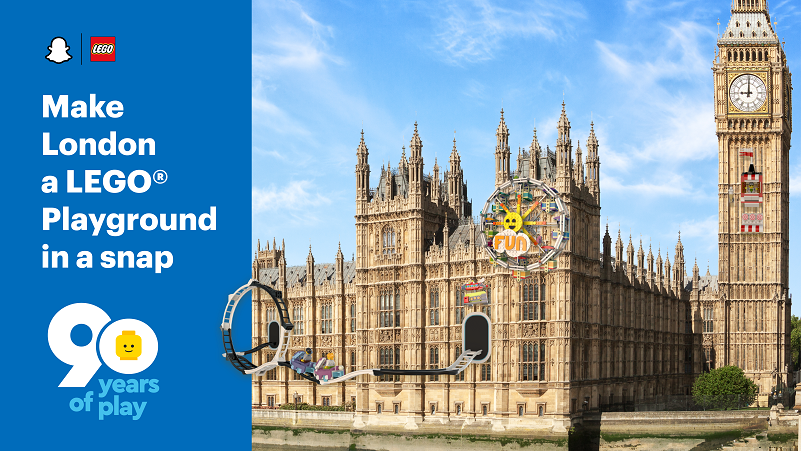 The Lego Group has launched an augmented reality (AR) Lens experience on SnapChat as part of the toy brand’s 90th Anniversary celebrations. The experience will enable Snapchatters and Lego fans to build life-sized fairgrounds and roller coaster-themed Lego models using the buildings of Central London as their canvas.

The Lens celebrates how Lego play has helped unlock imaginations for nine decades. Using Snap’s City Landmarker technology, Snapchatters can use the Snapchat camera to scan the Lego Snapcode here or open Snapchat and follow the Lego profile here to find the Lens. Through the Snapchat camera, buildings and streets in London will be transformed into a custom AR fairground, placing Lego rides including ferris wheels, roller coasters and colourful Lego decorations wherever the creator chooses.

Users will be able to see their AR creations for up to a year. They can build their Lego world, leave Snapchat and pick up their creations at their convenience and the Lego models will be exactly where they left them. Creators can remove, replace, and add new models, leading to ever-evolving hours of play and creativity. The experience is live in Central London and will be accessible to people aged 13 and above only.

“We’re really excited to be working with Snap on this opportunity to bring the joy of Lego creation to more people,” said Lego Group Global Social Media Strategy Lead, Lea Sandell. “The Lego system in play is all about unlimited creative opportunities, and we love the idea of new, ground-breaking technology and the classic Lego brick – which is at the heart of what we do – coming together to bring this brand new experience to life.”