2019 Award Winners: Brand, Agency and Disruptor of the Decade categories

Following our recent Effective Mobile Marketing Awards Ceremony, we continue our round-up of the winning campaign in each category with a look at the winners in our special ‘Best of the Decade’ Awards, where the winners were chosen by an industry vote.

Mobile Marketing Brand of the Decade
Domino’s
In the past decade or so, Domino’s hasn’t shied away from innovation. It’s launched digital billboards displaying real-time comments from customers, set up self-driving robot delivery services, and used drones to deliver pizza, among other things.

Before all this, however, its biggest developments came, arguably, when it rolled out its online and mobile ordering sites in 2007 and introduced its pizza tracker in 2008. These developments put the foundations in place for the world’s seventh-largest fast food restaurant chain to move from being a phone-based delivery business to an mCommerce market leader.

The company’s UK transition was helped by the alignment of its experience across all platforms and the development of a driver app and dashboard by its development partner, Future Platforms. Future Platforms’ work alongside Domino’s was also nominated for the Most Effective 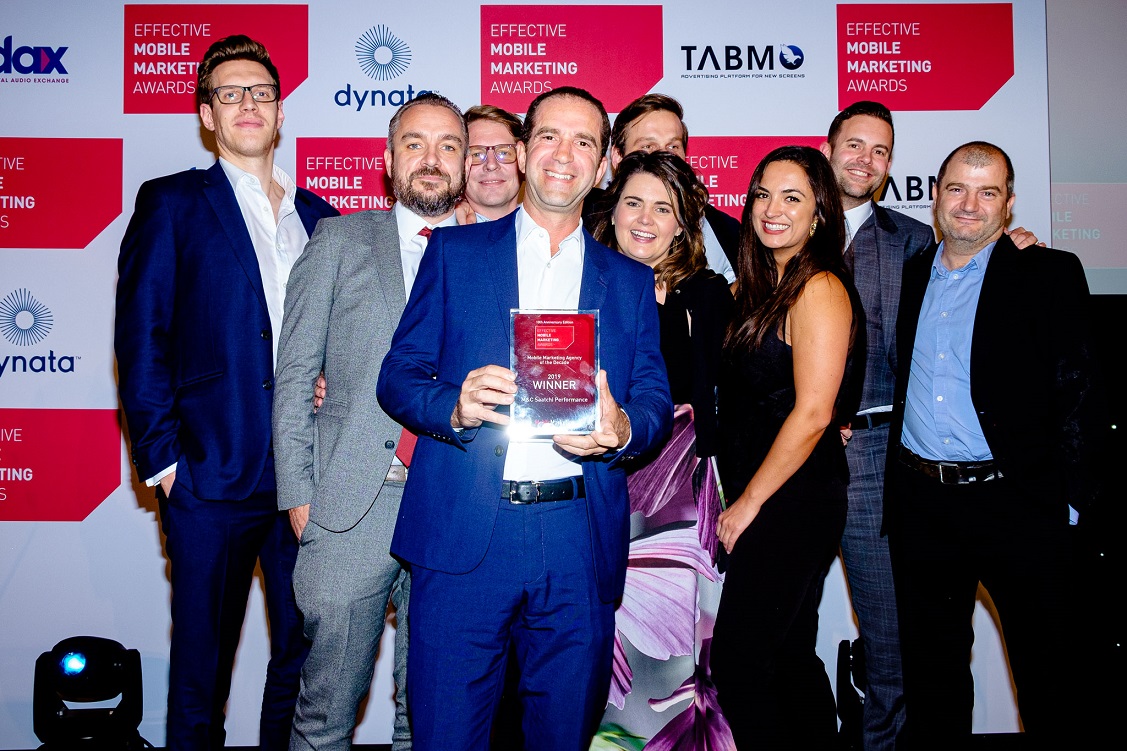 M&C Saatchi Mobile was founded by James Hilton as Inside Mobile in 2006. He sold the business to M&C Saatchi in 2010 and has since grown it to employ hundreds of people across the UK, Asia, and the Americas. It quickly took up its position at the forefront of the rise of mobile, being shortlisted for and winning multiple awards down the years for its work. Last year, it rebranded as M&C Saatchi Performance – a move designed to reflect shifting demand in the age of hyperconnectivity. Since then, Hilton has stepped away from his role as CEO – moving into the role of chairman and appointing Christian Gladwell to take his place.

Nonetheless, the agency’s name change hasn’t seen it slow down and it currently boasts clients including Audible, The Pokémon Company International, Bethesda Game Studios, EDF Energy, ZipCar, and many more.

Disruptor of the Decade
Airbnb
The home rental marketplace was founded in 2008 and has since transformed the hospitality sector, despite other similar platforms including FlipKey and HomeAway existing before it, really showing just why the platform is rightfully considered a disruptor. And, in turn, it has paved the way for companies like Oyo Rooms, which it just so happens to own a stake in.

Airbnb’s growth has happened alongside disruption right across the majority of sectors from other companies such as Uber, Spotify, Monzo, and DoorDash. Its presence has seen the number of hotel nights being booked fall and resulted in falling revenues across the industry as well.
Earlier this year, Airbnb officially passed the 500m guest arrivals mark across the 191 countries and 81,000 cities it operates in around the world. 2019 also saw it expand with the acquisitions of HotelTonight – as it looked to add more boutique hotels to its platform – and Danish workspace marketplace Gaest.com.

Those two acquisitions came a little over a year after another pair of purchases in the shape of accessibility firm Accomable and ad testing and optimisation platform AdBasis.