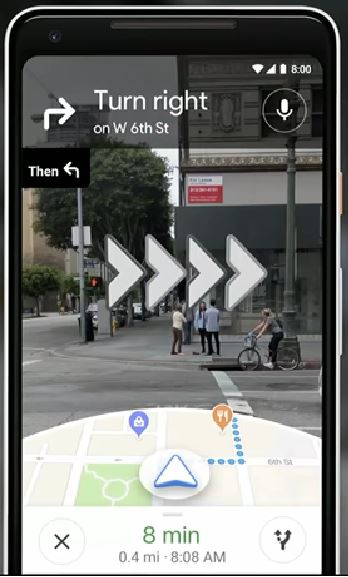 Google is testing an augmented reality overlay for Google Maps, designed to improve location accuracy. The move was reported by the Wall Street Journal,

whose reporter David Pierce recounted his experience of using the feature in the newspaper yesterday. From his description, it doesn’t look too far away from the kind of AR navigation that featured in Google Glass promos.

In the piece, Pierce describes how, after searching Google Maps for coffee shops, he was presented with a new option, ‘Start AR’, which, when tapped, replaced the usual map view with a real-time view of the world around him. He was then encouraged to move the phone around and point it at things to help the software lock on to his precise location.

Once it had done this, the AR overlay presented him with arrows pointing in the direction he needed to walk until his destination was marked on screen by a large, 3-D red location pin symbol. “It was as if Maps had drawn my directions onto the real world, though nobody else could see them”, Pierce wrote.

If a user keeps the AR display up for too long, they are encouraged to lower the phone. If they ignore the advice, the screen goes blank.

Google first announced plans for the feature at its developer conference last May. In its current form, it is being made available to a limited number of users while more tests are carried out on the AR functionality, including the types of direction markers that work best and that are not too intrusive.