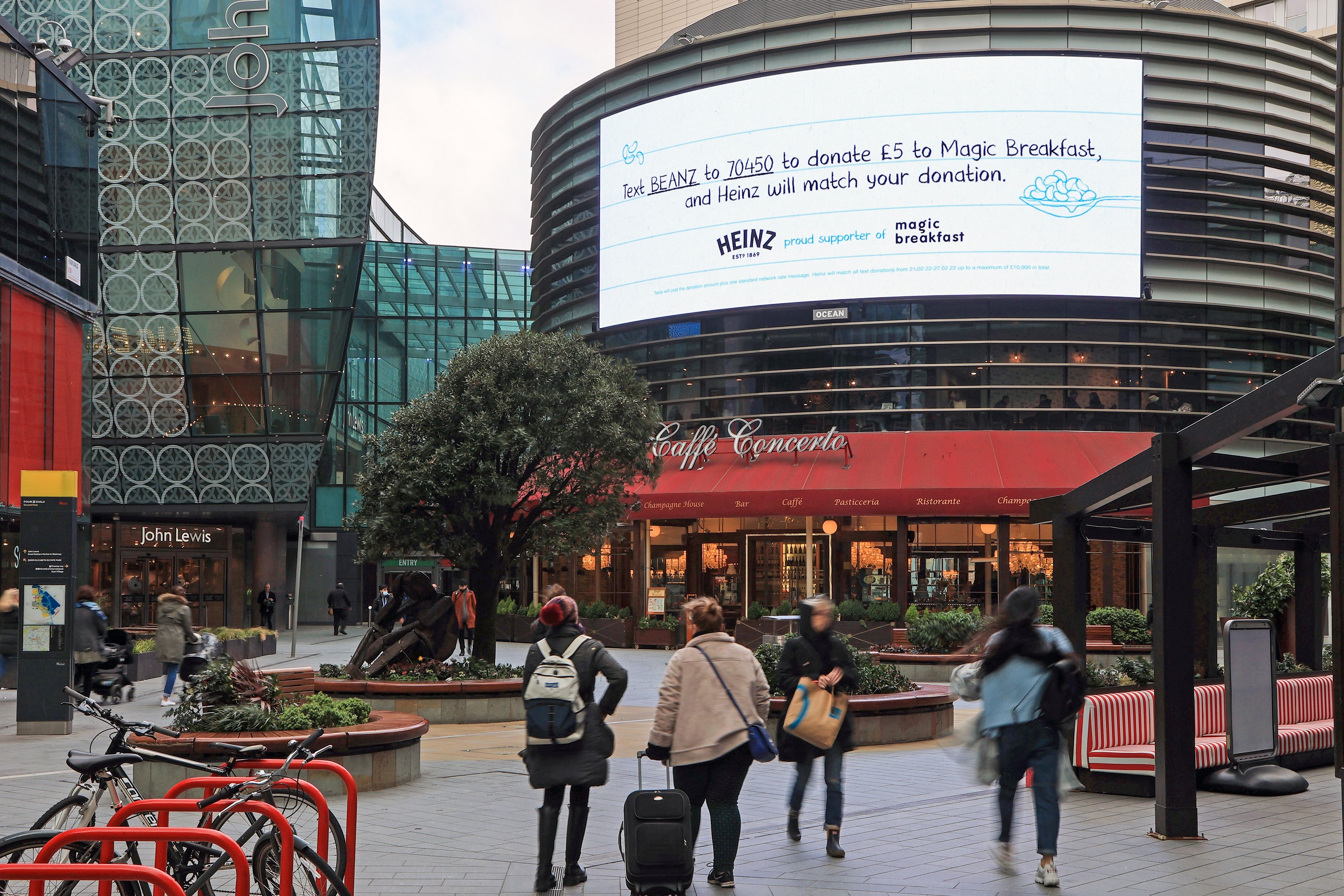 Heinz Beanz is continuing its support for the campaign against child hunger in the UK with an interactive out of home campaign using Ocean Outdoor’s LookOut technology to show how hard it is for children to focus when they go to school hungry.

The campaign launched yesterday and runs for seven days across nine interactive digital screens in six UK cities: Birmingham, London, Leeds, Manchester, Newcastle and Southampton. The chosen locations all have more than 30 per cent of children living in poverty. The campaign was developed and planned by Ocean Labs with  creative execution by DentsuMB.

Bringing to life the daily challenges faced by children who go to school hungry, Ocean’s LookOut technology creates the interactive experience, showing the severity of food insecurity experienced by many children up and down the UK.

As passers-by approach the screens they can clearly read the sentence: ‘It’s harder for children to focus when they’re hungry’. The longer they stare, the more difficult the sentence becomes to read, with various letters losing focus themselves and developing a life of their own through animation.

The screen then asks people to donate £5 by text to the charity Magic Breakfast, which will provide one child with almost a month’s worth of ‘magic’ breakfasts and help the 1.7m children at risk of starting the day hungry (Source: Department for Work and Pensions Family Resources Survey: Financial year 2019 to 2020). Heinz will match all donations received by text in the week of February 21 to raise vital funds for Magic Breakfast. Texts will cost the donation amount plus one standard network rate message. Heinz will match all text donations from 21 – 27 February up to a maximum of £10,000 in total.

The campaign is part of a five-year partnership between Heinz and Magic Breakfast, who work with more than 1,000 partner schools in the UK to provide nutritious breakfast food, such as Heinz No Added Sugar Beanz, to around 200,000 children. It furthers the 16m meals already pledged by Heinz to Magic Breakfast since their partnership began in 2019.

“It’s more important now than ever before that we continue our fight against child hunger with our brilliant partners Magic Breakfast,” said Heinz Beanz Brand Manager, Lucy Cooke. “As families up and down the country face increasing financial pressure, we hope that our immersive campaign will raise further awareness of the issue of child hunger and encourage widespread donations to a vital cause.”